“The insurance company
offered $10,000. Lenahan & Dempsey got us the
multi-million dollar settlement we need to pay
my son’s medical expenses for the rest of his life.” JT is a client of Lenahan & Dempsey
Home
Attorneys
Michael A. Dempsey 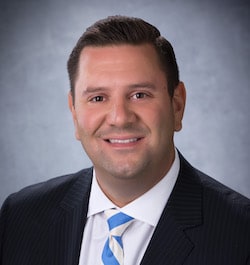 Attorney Michael A. Dempsey is listed in Best Lawyers in America and has been recognized for legal excellence as a Pennsylvania Super Lawyer as published in Philadelphia Magazine as well as by The National Academy of Personal Injury Lawyers.

Attorney Dempsey enjoys fighting for those who are not being treated fairly by large insurance companies following an injury. Michael Dempsey has represented hundreds of such innocent victims.

Attorney Michael A. Dempsey is an aggressive litigator whose professional practice interests lie across all areas of Personal Injury Law, including litigation and alternative dispute resolution, as well as Workers Compensation Law. Attorney Dempsey is also a member of the Firm's School Law Department where he protects the rights of Special Education students as well as bullied students who have been the victim of physical or emotional abuse.

Michael A. Dempsey is the third generation of the Dempsey family to practice law at the firm co-founded by his late grandfather, William J. Dempsey, Esq.

When not spending time with his active family, Michael A. Dempsey devotes himself to charitable and community causes. He has been honored for his work with the Cystic Fibrosis Foundation as one of "Philadelphia's Finest Young Professionals," (Northeastern and Central Pennsylvania are covered by the Philadelphia region of Cystic Fibrosis). In addition, he received the "Good Works in Lackawanna County" Award from the County Commissioners.

Michael A. Dempsey is also an elected Councilman for the borough of Dunmore, PA and currently serves as Council President.

A Dunmore native, Michael A. Dempsey received his law degree from the Widener University School of Law and his undergraduate degree from The University of Pittsburgh. As a young law student he was honored with the CALI Excellence For The Future Award and a Pro Bono Distinction Award from The Public Interest Resource Center.

Michael A. Dempsey, as well as all of the lawyers at Lenahan & Dempsey, offer free consultations and never charge a fee unless they are successful getting you the money you deserve following a serious injury.